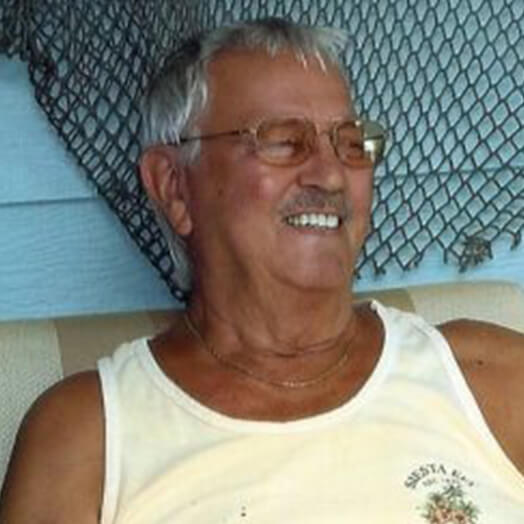 Malcolm (Marc) Barnes passed away on June 8, 2020 after a severe illness. Marc was born in 1938 in Gloucester, England, UK. His early years were spent surviving World War ll. He eventually went from a stint with the Royal Air Force to haberdasher to managing the Lido Municipal Pool in Cheltenham, England, UK. He came to the US in 1984 and settled in the San Francisco Bay area where he met his wife, Janet. They were married in 1986. Marc trained and worked as a Title Examiner in Redwood City, CA. However, being a ‘waterbaby’ by nature, it was a natural gravitation to move from California to Florida when his wife’s job changed. He loved the Florida sunshine, beautiful beaches and early retirement. Marc was a real animal lover. He used to say most animals were better than most people. He was a member of PETA and would become very upset at some of the stories and pictures he saw on Facebook. He leaves behind his beautiful rescue cat, Missy Kitty, a little grey spitfire he adopted from Cat Depot. Marc loved music; everything from Beatles rock and roll to classical Mozart. His favorite theatre was Les Miserables; concert, a toss up between ELO and Queene. In sports, he loved his rugby, soccer and came to love American football. Marc loved swimming. In 2009, due to a blood clot which could not be cleared, he suffered the loss of his right leg. He used to joke about swimming in circles! (His great sense of humor was welcomed and will be missed by all who knew him.) Marc loved to cook and continued to do so when he was wheelchair bound. He was ‘famous’ among friends for his Indian food. He thought it to be inferior to the Indian restaurant cuisine; his family and friends disagreed and always came back for seconds. Marc is survived by his loving wife, Janet, who was also his best friend; his son, Christian Barnes in England; his stepsons Allen Moon (Ronda Cochran Eaton), Nathan Moon (Heidi); grandchildren Haley Mattison (Christoph), Cale Moon, Austin Moon (Cheyenne); great grandchild Brayen Moon; many, many friends in England and the United States. No service is planned for now due to Corona-19; perhaps a memorial service in the Fall.