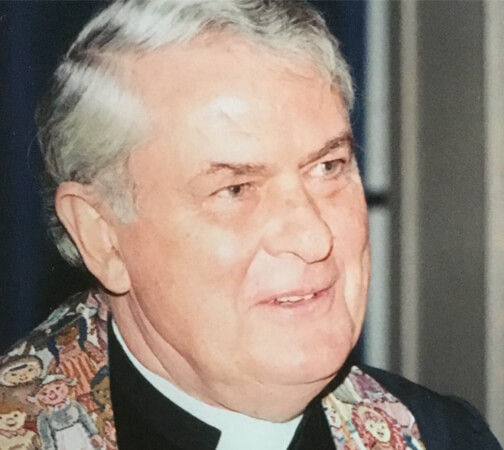 The Reverend Richard Goss, 82, died peacefully, on November 16th, 2020 in the home he loved, on St. Pete Beach, Florida. He was surrounded by loving family after a long, courageous battle with serious illnesses. Reverend Goss was born February 11, 1938 in Pittsburgh, Pennsylvania to the late George and Alice Goss.

Reverend Goss was referred to as Dick by his friends and family. While in high school, Dick liked fast cars and was a bit of a rebel.  This served him well, as he found a mentor in Reverend Ross Porter, and a cause—driven by faith and dedicated to human rights and social justice.

Dick graduated from Baldwin High School in 1957 and went on to receive a Bachelor of Arts Degree from Muskingum University, New Concord Ohio. Dick always had a special affection for firefighters. While he attended college and raised a small family, he was the Captain and of the local Volunteer Fire Department.  The favorite family legend begins, when Dick was on the firetruck with the crew and received an unexpected alarm. Imagine his surprise when the call was to his house.  His sons, fascinated by his Zippo Lighter, hid it under the bed, catching the mattress on fire.  As Dick was the Fire Prevention Officer, what was once fueled by fear and anger became a humorous family story.

Dick earned a Master of Divinity Degree from Pittsburgh Theological Seminary and in 1970 he and his family moved to Warren Pennsylvania, where he was the Assistant Minister at First Presbyterian Church of Warren.

While in Pittsburgh, Dick met his wife Diane, and both were dedicated to church and family. Dick and Diane fostered teenagers, who were in need of love and a home. Now at 50 years old, their foster son continues to be part of the family and maintains frequent contact and visits.

Dick was a preacher and a teacher, challenging his congregations to think past their biases and encouraging them to love and care for others. Dick lived by the words he preached. In his words, “We are not perfect or pure – we are not always even faithful – but God loves us in spite of our shortcomings.”

The relationship between “Old First Church” and the First Presbyterian Church in Havana, Cuba was a significant example of love through faith.  Dick, Diane and members of their church visited Cuba several times to share meaningful faith and cultural experiences.

After leaving Huntington, Dick and Diane moved to St. Petersburg Florida where he retired, and Diane worked as a Clinical Social Worker.  Dick and his Diane were able to enjoy several trips to Europe, visiting friends and former associates. Many people learned from and respected Dick and found solace in his wisdom.

A private memorial service will be held at Pass-a-Grille Community Church, St. Pete Beach Florida.  In lieu of flowers, the family requests donations be made to:

IN MEMORY OF REVEREND RICHARD GOSS